A Guide to Our Cool and Creepy Costume Hats and Headwear

Whoever said “So many hats and only one head!” must have been talking about the amazing selection of costume hats and headgear found at Windy City Novelties. Whether you want to be a Greek goddess, cartoon character, cowboy, witch, pirate, clown, alien, bunny, dragon, or something else all together, Windy City Novelties can provide you with the perfect topper for your Halloween or costume party attire.

Witches have to rank up there with the most popular Halloween costumes of all time. When you know you want to be a witch but your vision isn't complete, the Tall Black Witch Hat will provide you with a good place to start. This very basic witch hat is made of black, satiny fabric and has the traditional, tall, pointed shape with a wide brim. As your costume starts to take shape, you can add your own decorations to the hat, including feathers, ribbons, netting, stars, and glitter. The tall black witch hat can be used as part of a craft project at Halloween parties, and will even make great centerpieces or table decorations. The tall black witch hat is sold by the piece.

If you've ever seen the 2013 film “Oz the Great and Powerful,” you know witches aren't always ugly crones—although they can certainly get that way. The Black Rose Adult Witch Hat is designed for more fashion-conscious witches. The pointed tip of the whimsical black rose adult witch hat forms into a coy curl, while the front is adorned with a giant black rose and feathers. The hat is accented with artfully placed spider webs. The creepy and chic creation is sized to fit most adults and is sold by the piece.

Kid-witches will love the Child Orange Witch Hat. This spellbinding hat has a 21-inch circumference. The traditionally-shaped black witch hat is adorned with horizontal bands of orange ribbon going up the cone and the brim is also trimmed in orange. There is a large flat orange flower on the side, as well as a touch of black tulle. The child orange witch hat is also available with purple accents. The hats are sold individually.

Take to the high seas in the Flashing LED Pirate Hat. The black pirate hat has a high turned-up brim trimmed in gold braiding. The front of the hat is adorned with a large satiny skull and crossbones that lights up with red LEDs embedded in the empty eye sockets. The elegant LED pirate hat comes with two AG13 batteries included and installed. It is sold by the piece.

The Black Skull Cap with Pirate Logo is for less formal occasions on the Jolly Roger! The black skull cap, sized for older kids and adults, is embellished on the front with a white skull and crossbones. Wear this cap after Halloween while out riding your Harley for a real tough-guy look. It seems like old novels are always talking about young boys who run away and end up swabbing the decks of a pirate ship. 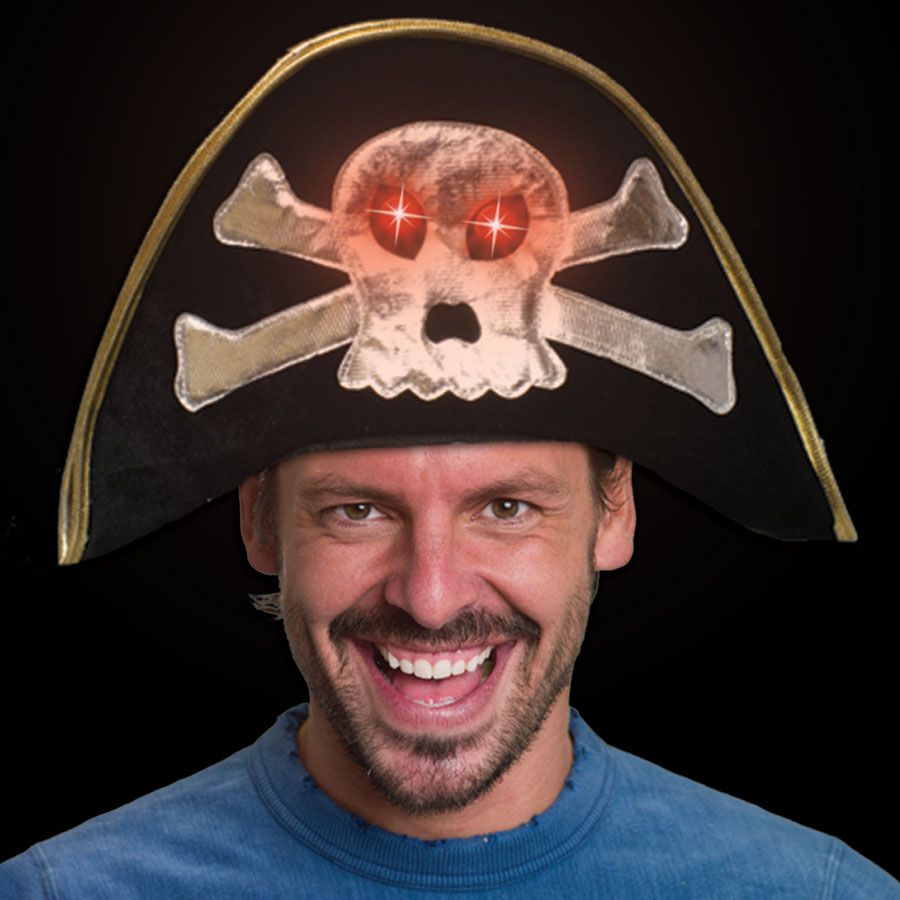 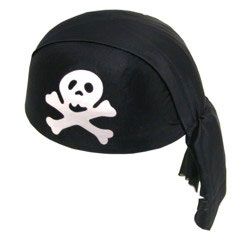 Food, glorious food! When food is your favorite thing, it only makes sense to wear it on your head! There doesn’t seem to be too many people who don't like pizza, so everyone is sure to love the Pizza Hat. The pizza hat is similar in style to a chef hat, with a band that fits around the forehead, but in place of the puffy white top, this hat has a fun felt pizza! The pizza hat is a toasty tan color, and the pizza itself has a variety of “toppings,” including pepperoni, black olives, onions, and more. Delivery drivers could increase their tip intake if they arrived at customer's houses wearing this silly hat! The adult sized pizza hat is one-size-fits-most and is sold by the piece (not the slice.)

The Hot Dog Hat is a perfect gift for self-described grill masters and sports fans. The cloth hot dog hat fits on the head with a wide red plaid band which is topped with a plump wiener in a bun. The hot dog is dressed with squiggles of mustard and ketchup. The hot dog hat is one-size-fits-most.

“Cheeseburger, cheeseburger.” The guys manning the kitchen at Chicago's Billy Goat Grill would probably never be so undignified as to wear the Cheeseburger Hat but Halloween is the perfect time for this sort of silliness. The poofy cheeseburger hat is styled to look like a toasty tan bun with sesame seeds on top. In between the top and bottom of the bun is the burger, a piece of square yellow cheese (the best kind), some lettuce, and a bit of onion and tomato. The cheeseburger hat is one-size-fits-most, but is sized primarily for adults. 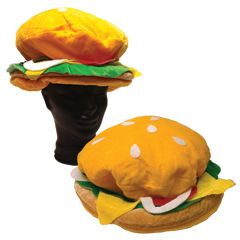 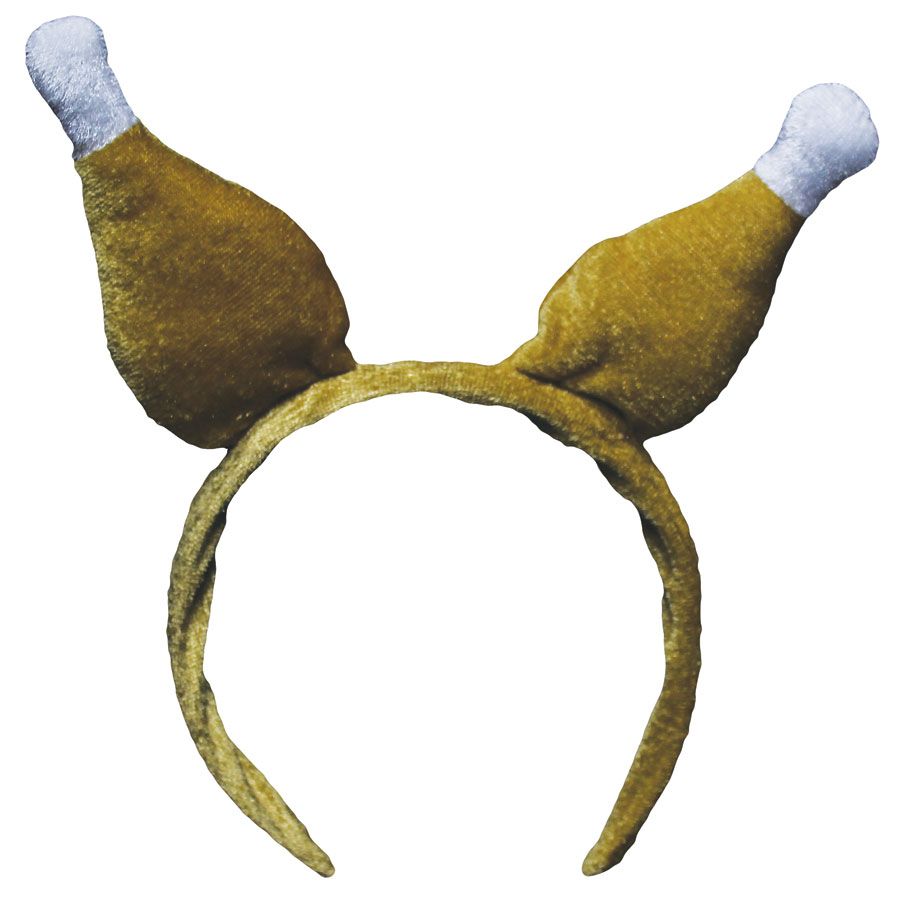 Spice up your Halloween with the Red Chili Pepper Hat. The oversized red chili pepper hat is impossible to ignore and will send out a signal that you're hot stuff. The chili pepper hat is made of shiny red fabric and includes a green stem. This hat would be sure to make you stand out against the competition at a chili cookoff! The hat is one-size-fits-most and is sold by the pepper.

It would be great fun to go out on Halloween or to a party in a group each wearing a food hat, or a White Chef's Hat. The white chef's hat has traditional styling with a band around the head, topped with poofy beret. This oversized white cloth chef's hat is sold by the piece.

Who hasn't dreamed of getting that telegram informing you that you're a long lost prince or princess? You're probably never going to be royal, but you can pretend for a day with a Royal Purple Velvet Crown. The royal purple velvet crown has gold trim along the top edge and is accented with fur. The plush crown is adjustable. It is sold by the piece.

The Red Royal Queen Crown is made of heavy cardboard with a gold metallic finish. The crown is accented with blue “gems,” glitter, and tinsel. Wear this crown on Halloween with a long velvet robe, or any time you need to elevate your mood. The crowns are packed individually in poly bags. 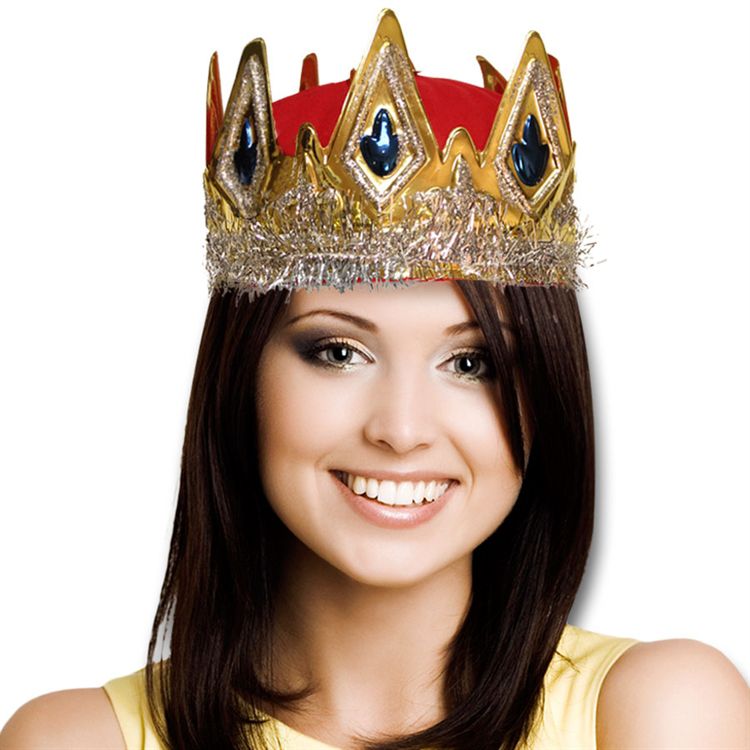 Minor princesses, bachelorettes, and birthday girls can advertise their status with the Pink Feather LED Tiara. The tiara is attached to a headband covered in pink velvety fabric. The tiara itself is fancied up with pink marabou feathers, fake gems, and high-powered LEDs. The pink feather LED tiara comes with three AG13 batteries included and installed. The tiara headband is one-size-fits-most and is sold by the piece.

Get ready for a boot-scootin' Halloween with the Silver Star LED Sequin Cowboy Hat. The traditionally-styled cowboy hat is fashioned of black sequined fabric and is accented with silver sequin stars. The edge of the cowboy hat brim is lined with 13 bright white LEDs that are sure to make you a stand-out on the dance floor. The Silver Star LED sequin cowboy hat comes with four AG10 batteries included and installed. The hat is one-size-fits-most and is sold by the piece.

The Giant Yellow Foam Cowboy Hat looks like it might be worn by an endearingly bungling sheriff. The 12-inch tall hat has an exaggerated brim, turned up on the sides, and is accented with a blue band and star. The yellow foam cowboy hats are great fun for guests at western-themed parties and also make interesting table decorations. The hats are sold individually.

Junior rangers will love the Children's Brown Felt Cowboy Hat. The brown felt cowboy hat has traditional styling with a dented crown and turned-up brim on the sides. The hat features a black band, braided trim around the brim, and a string to secure it to the wearer's head while he or she is out riding the range or hitting the streets in search of candy. The brown felt cowboy hat, paired with your child's own jeans and a plaid shirt makes a simple and inexpensive Halloween costume—just add a bandana. The child-sized hat is approximately 19 inches in circumference.

Live from Remulak (a small town in France) is the Egg Cap Headpiece. The flesh-colored, adult-sized egg cap will give your head that attractive bald cone shape. The egg cap has molded-on ears and brow bone. It is sold by the piece.

Put on the Medusa Headpiece and have fun watching people keeping their eyes averted when speaking to you all evening long. The Medusa headpiece, sized for adults, is molded to look like a mass of green snakes, fangs at the ready. The latex headpiece is sold individually.

You're sure to look sweet and cuddly in the LED Bunny Ears Headband. The white bunny ears are lined with pink sequins that light up with multi-color LEDs. The ears are attached to a fur-covered headband. The LED bunny ears come with three AG13 batteries included and installed. Go full bunny with Bobs Burgers Louise Bunny Hat. The charming cartoon-inspired hat is made of soft and cozy pink fabric. The hood-shaped hat has pink bunny ears that stand straight up, and long dangling ear flaps. The Louise bunny hat is sold by the piece.

Everyone loves a clown—except those who are terrified of them. Be as funny or scary as you like in the Clown Bowler Adult Hat. The black, adult-sized bowler hat is accented with a rainbow band to match any hair color, and is trimmed with yellow flowers.

Medieval heroes will look great on Halloween wearing the Viking Helmet. The helmet is made of gold-colored molded plastic and has two long, curved horns poking out from the sides. Aspiring opera divas will also love the Viking helmet, and you can officially declare Halloween over when they start to sing.

People wear many different hats in their everyday lives—mom, dad, sister, brother, husband, wife, teacher, and so on—but none are so fun as the hats you can find at Windy City Novelties!